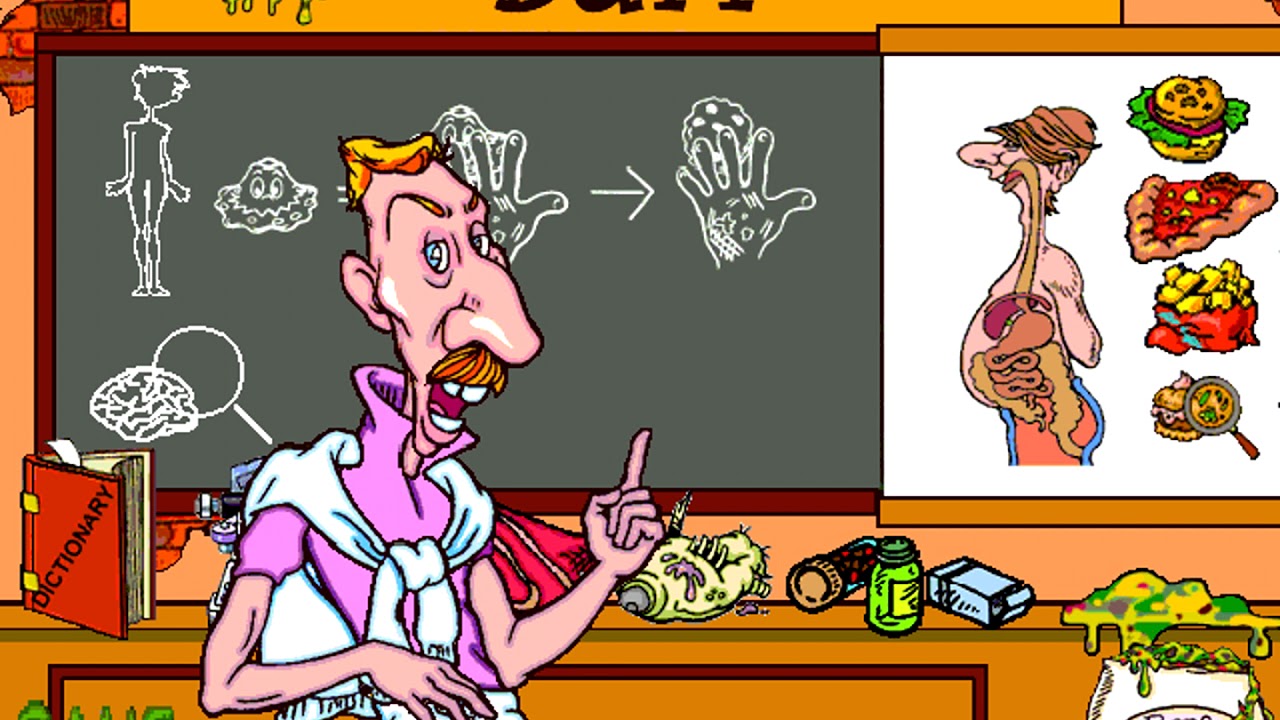 Playlist for this gameplay series:

After signing a document held by a man who is mostly nose you will meet your guide Ginger Vitis. Soon appear the nine teachers of Grossology all with blunt paranomasic names. These tutors are masters of the art of “Stealth Learning,” In other words they mask biology in children’s love of the gross.

There are nine different “lesson” areas each with it’s own fitting teacher and game as seen below:

Booger Block Game: Shirly Snotgrass has snot dripping from her humungous nose, stop them before they reach her mouth.

The Drool Show Game: Find out which food will make the teachers mouth water.

Burp-O-Rama Game: Listen to the burp pattern and the repeat it.

Dr. Sleuth Game: Diagnose patients from what they say, how they look and whats on your handy medical chart.

Don’t Pee Your Pants: Build a tube for Tommys urine before its to late!

What A Wound Game: Heal you instructors wound by playing a game of Othello in a open gash in his arm. Instead of Black vs White, its White Blood cells vs Germs.

Something Special In The Air: A game of concentration involving the appropriate (inappropriate?) subject matter.

You can also create and play music using human organs as instruments, print out crossword puzzles, listen to bizarre sing-alongs (Hydrogen Peroxide! It makes my wounds burn!), Encyclopedia of Gross Terms, browse a gallery of clip art, Recipes (i.e. Make you own snot!) and even get your diploma as a Grossologist.

Extras
Based on the books of the same name, and like those books the game came with a slightly orange tinted glob of fake plastic vomit. Unlike the books it also came with trading cards and stickers.
Museum
The Grossology Museum Tour has been seen with booths playing the game at their exhibitions.
Soundtrack
The Grossology CD can be put into a standard CD player to play the following characteristically gross songs.
Scab Joy
Mamma Mia
Excuse me
Pimple Explosion
Stuffed Up
Ice Cream Split
Nature Calls
Sympathetic Heaver
Science Project

GrossologyPC
Some games on this channel can be downloaded from here: