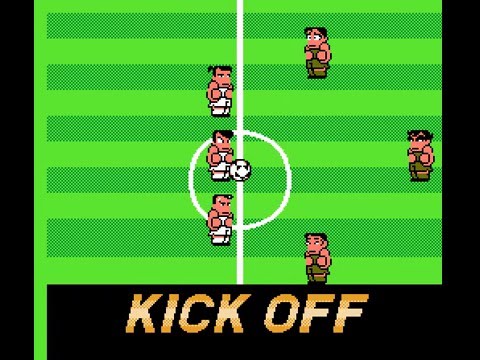 After winning the previous soccer tournament Kunio gathers captains of the defeated teams to represent Japan at the World Cup.

Kunio Kun no Nekketsu Soccer League is a soccer-themed game in the Kunio-kun Nekketsu High School series, best known for River City Ransom. It is the sequel to Nekketsu Koukou Dodgeball-bu Soccer-hen, known as World Cup Soccer in English versions. The game was never released overseas, but there was a (inferior) Nintendo DS remake called River City Soccer Hooligans. As with other Nekketsu titles, this game features a wide variety of special moves, combat-like competition, hazardous arenas and a simple comical plot.

Each character has four stats: power, shot, defence and energy type (which probably means running speed). Each teammate has his own special moves and personal preferences regarding the items and positions on the field you give them. The happier your players are the more likely they are to comply with your commands and the more efficiently they play. Each enemy team has a unique special shot, their players have some common special moves too.

There are six game modes: singleplayer story mode; 2-player story mode (2p controls a goalkeeper); 2-player versus mode; 4-player versus mode (1p vs 3p, with 2p and 4p as goalkeepers); singleplayer and 2-player penalty kick modes. The player can only directly control a captain of their team, while giving commands to their AI-controlled teammates on what to do, and in which direction. You can save your progress in story mode by using passwords. The password for each match is shown on the Results board.

Played on Hard difficulty. Although I manage my team poorly, I try to show pretty much everything there is in this game. After the credits I show a compilation of losing cutscenes and South Korea’s special shot.