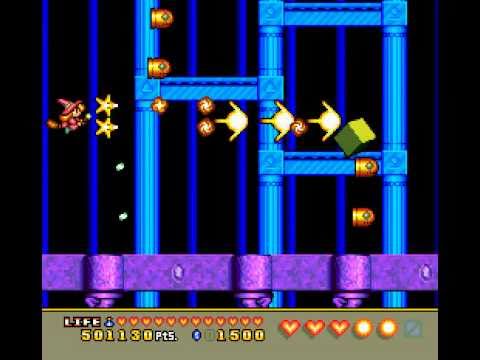 Released by Quest in 1991 (1993 in USA), Magical Chase puts you on the broom as Ripple, an apprentice witch, who accidentally took a look inside a forbidden book, and the demons got out of it.
Ripple’s teacher wants all the monsters back in the book, or else she’ll turn Ripple into a frog.
Not hesitating, Ripple got her broom, and her elf stars Topsy and Turvy, and flies out to shmup heaven!

I am (poorly) playing on the Waku Waku (Bumpy) difficulity. Raku Raku (Breezy) ends after 3 seals.

This is, without doubt, THE rarest TurboChip/HuCard available, next to Sapphire and Darius Alpha!
I used the Japanese version of the game, and yes, there are some changes, like a few graphical changes. That, and I can’t find a good dump of the (U) version.

The graphics are incredibly colorful and vibrant, with a whole jug of cuteness added for taste!

The music in the game is freaking epic, so much so, I decided to record all of them, almost all of them from the hidden Sound Test (Left, Down, Right, Up, Select x3, Left, Right, II), except for the Waku Waku/Doki Doki (Rough) ending, which I recorded from the HES. Here, have a listen!

The controls are smooth, but the control of the twin stars takes some time. You press I when not shooting to set the position of the stars, I while shooting locks the stars in the direction they are facing.

You can buy spells, extra heart containers, elixirs (Replenishes all health when depleted), power-ups and brooms for speed with all the crystals you find from enemies and cleared stages.

There are spells in the game, one that restores 2 hearts, one that eliminates all enemies, and one that destroys all bullets. How to use it? Tap II twice.

It was later ported to Game Boy Color as Magical Chase GB in 2000.

I hope you enjoy the longplay, despite how much I suck at cute-em-ups. (Hey, at least I am honest!)