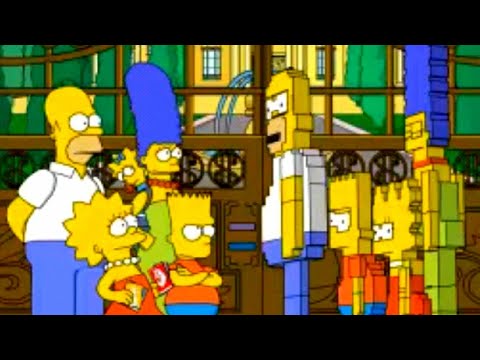 A playthrough of EA Games’ 2007 license-based platformer for the Nintendo DS, The Simpsons Game.

The Simpsons Game came out in 2007 around the time of The Simpsons’ made their big screen movie debut, and it was released on every viable platform on the market at the time. The DS game, however, was quite a departure from the 3D platformer seen elsewhere. Both games follow the same plot and level themes, there are a ton of FMV and voice clips shared between them, but they are indeed different games.

The real shocker? The DS version is just as good as the console games. Who would’ve expected that?

The switch to 2D works quite well here. It sidesteps the major performance issues that the PS2 and PSP games suffered from, and even though it isn’t anywhere near as eye-catching, the controls on the DS are far more responsive and accurate than they were on the PS3 and Xbox 360.

The game’s story, written by the show’s writers, places the Simpsons in their own video game with a host of superpowers, and it uses this setup to create a pretty hysterical satire of endless numbers of video game tropes and conventions.

The game play is rock solid, and works like a simple puzzle-platformer. Each stage has you alternating between two different members of the family, and each pairing has to use their powers together to clear the objective for each area. It reminded me a lot of The Lost Vikings in this regard, albeit far simpler. The game is quite short and easy, but it’s tons of fun all the way through.

The artwork is uniformly awesome. It uses a combination of traditional 2D spritework and prerendered models instead of realtime 3D graphics like the other versions, and even at the DS’s excruciatingly low resolution the quality of the art shines. The animation is fluid and true to the characters, and all of the backdrops and enemies feels true to the show. There’s also a lot of FMV included – the cutscenes from the console versions are here, and they look much better you might expect from a handheld with surprisingly few compression artifacts.

The audio fares even better than the visuals. There are a huge number of voice samples for all of the characters (including the secondary background characters), and they’re all voiced by their original television actors. Given the sheer amount of high quality audio and video clips, it’s not hard to see why the developers opted for a 128 megabyte cart to ship with.

But the real star here, as you might expect with the show’s talent directly involved, is the writing and the acting. The jokes here are usually pretty funny and loaded with generally clever commentary on the state of video games. The game is actually significantly funnier than the TV series was at the time, and I liked it’s humor more than the jokes that were in the movie.

I actually spat soda from laughing the first time I heard, “I’m Will Wright, bitch!” And it’s voiced by Will Wright himself. My stomach hurt I laughed so hard at that.

I really like how the game lampoons other games, even if it’s a thinly veiled excuse to adhere to the same tropes itself. It rips on Mario, Zelda, Donkey Kong, Street Fighter II, and Grand Theft Auto, among others, even going so far as to include a few JRPG battles with Mr. Sparkle.

If you like The Simpsons (or used to), old-school style gameplay, top notch production values, and *good* license-based games, you can’t go wrong with this superstar effort.

Side note: while I do typically record my handheld game videos using filters and borders to make the visuals better resemble the hardware the games originally played on, I didn’t want to shrink the screen any more than I had to for this one because of the awkward aspect ratio. Luckily unlike most DS games, this one doesn’t account for the gap that separates the screens, so the top and bottom screen images merge nicely with no visible seam.

_
No cheats were used during the recording of this video.

Visit for the latest updates!